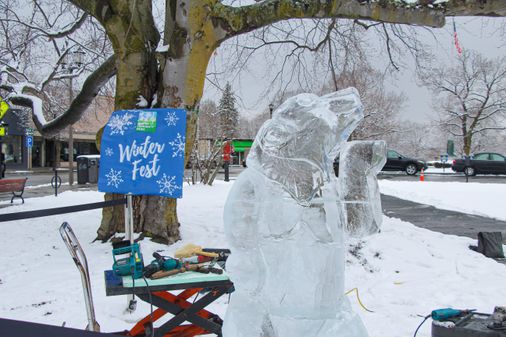 Gavris said the event was important for bringing the community together during the pandemic.

“It definitely takes a village, as they say in Newton, to put on the event,” Gavris said. “But we are very grateful for the partnerships we have developed.”

WinterFEST started with the soup social at the Hyde Center Playground in the Newton Highlands on Saturday February 12. The outdoor event also featured ice cream and live music by The Porch Rockers, a group of Newton residents, and Newton North High School’s Melocotones, an acapella group.

Newton Mayor Ruthanne Fuller was on hand alongside Newton City Council members who served soup to customers lying on the Lincoln Street sidewalk.

“You can see how hungry people are to be together enjoying the soup and the music,” Fuller said. “What you see is joy and happiness, music and dancing.”

WinterFEST attracted more than 20 community sponsors, including the Village Bank.

“It’s our home base,” said Susan Paley, vice president of community relations for the Village Bank. “We are very committed to this community, and we try to make sure that we financially support a lot of fabulous events, not just events, but ways that will build the community and make us stronger together.”

On Sunday, Feb. 13, the second day of WinterFEST opened in Cold Spring Park for a 1.5-mile educational winter walk with Newton curators about plants and animals in increasingly cold and snowy weather, according to Newton Community Pride WinterFEST webpage.

“I think one thing that’s beautiful and coming out of the whole pandemic is that people are really thinking local, and they really want to support local,” Osborn said. “It’s really beautiful.”

Osborn had two tents — savory and sweet — and partnered with All Over Newton’s LoveFEST, a one-stop shop for ordering local Valentine’s Day gifts online for delivery or pick-up at WinterFEST.

Lauren Berman, owner of All Over Newton, said she strives to help local businesses with their marketing and exposure through “meaningful events that work for small businesses in Newton.”

WinterFEST and the Winter Pop Market stalls closed on February 13.

“We think a really healthy, outdoors, socially distanced and safe environment, enjoying the winter weather and enjoying the entertainment was really something we wanted to provide to the community this year,” Gavris said.

Thalia Lauzon and Charles Moore can be reached at [email protected]